New Mexico Ornithological Society (NMOS) expands our knowledge of New Mexico avifauna by sponsoring field expeditions. These field expeditions are multiple-day trips, usually involving camping, to all corners of the state that lack ornithological knowledge or are under-birded. Increasing our knowledge about breeding densities, migratory routes and winter distribution are all foci for the expeditions. Participation is voluntary, participants will arrange their own transportation, and food should be brought by each individual. Small groups split up during the expeditions to cover as much ground as possible each day. Groups return to a rendezvous point each day to compare notes. One, possibly two, trips will be scheduled each year, focusing on different seasons. For more information on these expeditions, please contact Matt Baumann at mbaumann22@gmail.com.

The inaugural NMOS Field Expedition was held on the Wind River Ranch in Mora County along the Mora River, immediately adjacent to Watrous, from 11-13 May 2012. Ten birders participated in gathering presence/absence data and relative abundance information. This 4500 acre ranch is being added to the USFWS New Mexico Refuge Complex which also includes Las Vegas and Maxwell National Wildlife Refuges. This ranch is a key piece of the >300,000 acre watershed protection area that has been identified by the USFWS as an “approved boundary” for the potential refuge lands in the area.

While an incomplete avian checklist had been compiled for the area, to our knowledge this was the first targeted search conducted at the Ranch. The group assembled on the afternoon of 11 May to discuss protocol, and designate team members and search area boundaries. Early on the morning of 12 May (International Migratory Bird Day), the group split into four teams to cover designated sections of the Ranch. Habitats included cottonwood/willow riparian along the Mora River, oak/juniper/ponderosa woodland, abandoned agricultural land, and grasslands. In the evening the results were compiled over a potluck dinner while it rained. The morning of 13 May some of the group explored sections of the Ranch to try to add species to the totals and view the resident herd of American bison.

A total of 92 species were tallied for the weekend. As expected, the riparian habitat supported the highest diversity with 84 species recorded; we documented 49 species in the oak/juniper/ponderosa woodlands and 30 species in the grassland-associated habitat. Ten new species were added to the Ranch list (see NMOS Bulletin 40(2): 31 for additional avian details). These data will be used to assemble a revised avian checklist for the Wind River Ranch.

On 6 October 2012, nine birders braved the challenges of conducting a fall “pelagic” trip on one of the larger bodies of water in New Mexico – Elephant Butte Lake in Sierra County. The group boarded a 22-foot rental pontoon boat and daparted from the Rock Canyon Marina to explore the entire body of water in search of fall migrants and waterbirds. Captain Matt Baumann kept the boat in deeper waters (for the most part) allowing the group to scan while motoring around the pond (it exhibited some of the lowest water levels in many years). For the 5+ hours on the lake, the group tallied a total of 29 species (see NMOS Bulletin 40(3 and 4):48 for some additional avian details). Totals were submitted to the NM Bird Records Committee.

NMOS conducted a field expedition to the high elevation peaks at Vermejo Park in northern New Mexico from 20-22 July 2018, led by Matt Baumann and Raymond VanBuskirk. Our specific target was locating evidence of breeding Brown-capped Rosy-Finches. VanBuskirk et al.’s recent finding of Brown-capped Rosy-Finches carrying nesting material in the Wheeler Peak Wilderness has prompted statewide surveys for this species. Vermejo Park was considered to be an ideal location to try and search for this species because it has expansive suitable breeding habitat and a few historical sightings, but is rarely explored. We implemented VanBuskirk’s point count search protocol throughout the weekend. We looked for the rosy-finch as well as other species of interest, including White-tailed Ptarmigan, Fox Sparrow, White-winged Crossbill, Boreal Owl, and Wilson’s Warbler. 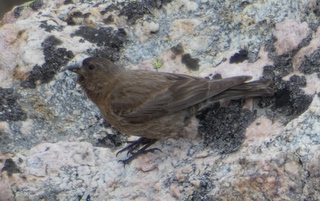 “We began the hike out to our campsite in the early afternoon on Friday. We hiked approximately 3 miles along the ridge, keeping an eye out for horned larks and pipits, of which there were many. We then scrambled down the slope to the lake we used as a base camp. We dubbed the spot “Pika Lake” because of the dozen or so pikas we saw and heard on the rocky talus slope across the lake. After setting up camp we did some scouting of the slope from below, hiking a few miles north along the tree line. While we had plenty of birds such as White-crowned Sparrows, Pine Grosbeaks, and other alpine birds, we didn’t detect any rosy-finches. The next morning we set out at dawn, scrambling up the rocky slope and working our way north. Thanks to Raymond’s tip, we knew to keep an eye out for snow packs on the ridge slope, as we were more likely to see rosy-finches around snow. Throughout almost 6 hours, 4 miles, and 1,000 ft elevation gain, we found four large sheets of snow within a mile of each other. We later found out that we were the only team that had snow in our survey area. It was at the fourth and final snow sheet that we finally found what we had been looking for – a Brown-capped Rosy-finch foraging on the snow! We initially observed the bird, a fairly bright male, foraging for about 10 minutes before it flew due west down the cliff face towards the talus slope. The bird was out of sight for about 3 minutes before it returned to the same snow patch and resumed foraging. It continued foraging for another 5 minutes before it flew off again in the same direction. The talus slope in the direction that the bird was flying was extremely steep and unstable so we couldn’t follow the bird to search for a potential nest. We staked out the snow patch for roughly 20 more minutes, with no visuals. At around 11:14 we heard, then saw, the bird fly over us heading west towards the alpine tundra. We pursued the bird west for about a quarter of a mile but couldn’t relocate it. About an hour later at the end of our survey, we doubled back in the same direction to check the snow patch again, but the bird wasn’t present. We then spent the rest of the afternoon hiking the ridge and tree line for other rosy-finches (no luck) and other birds. The next morning we packed up our camp and surveyed the ridge on our way back to the car, once again finding no rosy-finches but plenty of other birds, as well as a herd of about 250 elk and 30-40 bighorn sheep.”