The New Mexico Ornithological Society (NMOS) offers fund-raising field trips to select birding destinations. Our goal is to raise additional monies for our General Fund as well as for our Research Grant programs. These trips are competitively priced and include expert local leaders as well as an NMOS leader familiar with the area to be visited. A small amount of the total cost of the trip will be deposited into one or both of the NMOS programs to further our knowledge of ornithology in New Mexico. Information about trips will be posted on this webpage as it becomes available, so make sure to check the website regularly for your opportunity to contribute to NMOS as well as to travel to fabulous foreign and domestic birding locales. 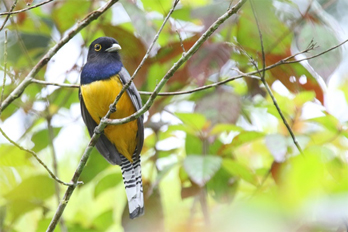 A group of nine NMOS members and friends participated in the Belize fundraising trip for NMOS from October 23 to October 31, 2021, with three adding on an extra (unplanned) day at the end of the trip. A total of $2700 was raised for our Society. We arrived at Belize City airport all at about the same time, then were picked up by local guide Isaias Morataya and drove directly to Black Rock Lodge in western Belize. After two days there, we drove to Pook’s Hill Lodge (near the capitol of Belmopan) stopping in the Mountain Pine Ridge at several sites along the way and at the Green Hills Butterfly Ranch.

We spent two nights at Pook’s Hill, ably guided by Mario Choco and Mike Iko, then drove to Hopkins Bay Resort (on the beach at the town of Hopkins), stopping at St. Herman’s Blue Hole National Park and Hopkins Wetlands along the way. After a night at Hopkins, we were picked up by guide Steve Choco to travel to the Lodge at Big Falls in southern Belize’s Toledo District.

During our four nights at Big Falls, we visited many parts of southern Belize, including the Nim Li Punit archeological site, Dump ricefields, Pedro Lagoon, Blue Creek, the Tunich Ha Reserve, and the Cattle Landing hawkwatch (just north of the town of Punta Gorda). We also enjoyed a fabulous cacao experience and lunch at Ixcacao Farm (just recently visited by William and Kate!).

Most of the group then returned home via an internal flight from Punta Gorda to Belize City and then their international flight to the U.S., but three stayed on an extra night for some birding with guide Ivar Marchand. We birded several areas outside of Belize City, including Captain Hook’s Shrimp Farm (shorebird hotspot), the Ladyville area, and downtown Belize City. 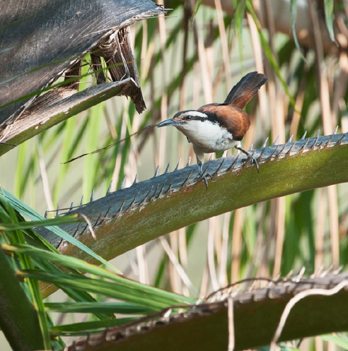 From March 20 – 2 April, 2014, eleven NMOS members toured Chiapas, MX on our fundraising field trip to this wonderful southernmost state of Mexico. The participants were treated to the superb guiding services of David MacKay of Alamos, Sonora, and the group also enjoyed the services of local guides at several localities. Designed to hit as many of the accessible habitats within a short drive of the capitol city of Tuxtla Gutierrez (TG), we spent the first three days of the tour in the high elevations, along the Atlantic Slope, and then in the interior valleys toward the Pacific Slope.

Making for a long first day, we headed to the mountains east of San Cristobal de las Casas where we had crippling views of Pink-headed Warbler, Rusty Sparrow and Blue-and-white Mockingbird before ending the day at the Reserva Huitepec attempting to see Unspotted Saw-whet Owl. On the second day we birded the tropical evergreen forests near El Ocote on the Atlantic Slope to the north and west of TG, recording such specialty species as Nava’s Wren (singing and seen well, which is very unusual), Long-billed Gnatwren, Blue-crowned Motmot, and Keel-billed Toucan. We ended the day at a large reservoir where we observed up to eight Sinaloa Martins as they flew overhead. On the third day we visited Cañon del Sumidero where we saw Slender Sheartail, Belted Flycatcher and incredible views of the canyon below us before driving south and east to Jaltanango for the night before our hike into El Triunfo Biosphere Reserve. 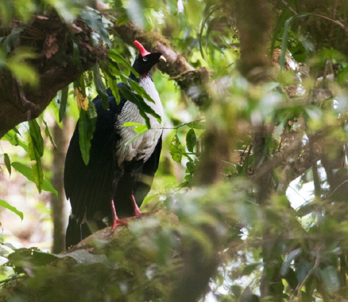 The next morning we loaded into trucks and drove to the trailhead where the caballeros loaded our gear onto mules and we hiked into one of the most remote locations in the Western Hemisphere. This huge Reserve is home to hundreds of species of birds, and we saw plenty of them on the 12 km hike to the facilities which were to be our home for the next four days and nights. Accommodations were rustic but totally adequate (beds and flush toilets!) and the meals simple yet substantial. We birded many of the trails based out of this central complex, and observed Resplendent Quetzals doing display flights, Yellow Grosbeaks, White-faced Quail-Dove, Spotted Nightingale-Thrush, Collared Trogon and the outrageous Horned Guan whose world population is estimated to be around 2500 individuals. We then hiked down the Pacific side of the Sierra Madre Occidental during a three-day journey, birding all day long while the mules carried our gear for us to our next camping location down the mountain (25 km total). After meeting our waiting bus, we drove north to Arriaga to our hotel for a hot shower and cold beer, and prepared for one last day of birding in the Pacific Lowlands.

On our last day we scoured the lowland tropical deciduous forest habitats of coastal Chiapas and found Rosita’s and Orange-breasted buntings, Lesser Ground Cuckoo, Giant Wren (photo), Mangrove Cuckoo, and a suite of coastal waterbirds. We then drove back to TG for our last night in Chiapas together, and had a magnificent meal at the hotel while compiling our species totals. Not only did we generate needed monies for the NMOS publication fund, we tallied over 400 species for the trip, including 7 cracid species, 27 raptor species, 12 species of doves/pigeons, 30 hummingbird species, 5 trogon species, 5 of the 6 species of motmots recorded in the country, 9 species of parrot, and an amazing 31 species of warblers.

Spring Migration in Ohio: Warblers, Woodlands, and More! (May 2013)

The NMOS-sponsored fundraising trip, Spring Migration in Ohio: Warblers, Woodlands, and More, took place May 16 through 22, 2013. Seven trip participants were treated to the best of what the Eastern U.S. has to offer at the peak of migration. We spent several days working woodlands and hotspots, including the famed boardwalk at Magee Marsh, on the south shore of Lake Erie, in pursuit of passerine migrants, before meandering down to the hemlock forests in the hills of Amish Country to observe a number of songbirds on their breeding grounds. Along the way, we hit beaches, estuaries, and a top-notch restored grassland on private property, among other habitats and world-class birding locales. 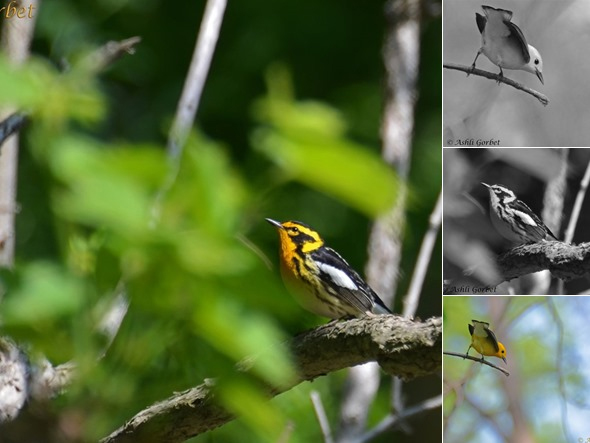 Aside from the incredible scenery, the birds were stunning and cooperative. We observed twenty-eight species of warblers, with the vast majority offering long studies of individuals of each age and sex class. We were treated to long views of birds foraging, singing, and even observed nesting behavior of Yellow and Prothonotary Warblers! We watched slack-jawed as flocks of diurnal-migrant Blue Jays streamed overhead; enjoyed extended studies of a Pileated Woodpecker foraging on a downed tree; were charmed by point-blank views of an American Woodcock incubating her eggs; observed a pair of Baltimore Orioles weaving their nest; and chuckled at the antics of a pair of Semipalmated Plovers dancing in unison as part of a bonding ritual. For many, the highlight of the trip was being granted permission to bird an outstanding private grassland area that has been painstakingly restored over many, many years. Here, we were thrilled by scope views of near side-by-side singing Henslow’s and Grasshopper Sparrows as Bobolinks displayed overhead, bubbling over with joy that a new spring had arrived. All-in-all, we tallied 148 species of birds, ticked approximately ten different habitat types, observed a myriad of plants, wildflowers, trees, bugs, and even got great looks at the gorgeous, range-restricted, and Ohio state-listed threatened Blanding’s turtle!

Many thanks to our trip participants: Sylvia Fee, Larry Gorbet, Nancy Hetrick, Lou Prime, Donna Royer, and Beverly Silfer for making the trip a memorable experience for all and a resounding success for the society!

Our first foreign trip under this program, the November 5-17, 2012 NMOS-sponsored Field Trip to Cuba was a smashing success. There were fourteen participants. The group met in Miami the night before the flight to Havana. Upon arrival in Havana, the group met the local Havanatur guide Raydalie Perez O’Farrill, birding guide Giraldo Alayon, and overall tour organizer Gary Markowski (Caribbean Conservation Trust, Inc.).

During the next 13 days the group birded in 10 of 15 Cuban provinces and explored the western two-thirds of the country by comfortable bus transport. Destinations and birding locations included: Havana, San Diego de los Banos, Guanahacabibes National Park, La Guira National Park, Zapata Peninsula and Zapata Swamp, Bermejas, La Turba, Las Salinas Wildlife Refuge, Camaguey, Najasa, Sierra Cubitas, and then back to Havana. Avian relative abundance and distributional information was gathered at national parks, biosphere reserves and other locations that have been visited by other birding groups during the previous 12+ years. This information will be deposited in the Natural History Museum in Havana and also with the Rouge River Bird Observatory in Michigan. See the attached Daily Log and Annotated Species List for avian highlights. In summary, the group recorded 48 avian families and 157 species total, including 21 of 25 possible endemic bird species. Two mammal species, 6 reptile and amphibians species, and 40 butterfly, 2 moth, and 7 dragonfly species were also observed.