The New Mexico Ornithological Society (NMOS) is pleased to announce the recipients of the 2012 NMOS and Ryan Beaulieu Research Grants. Each received $1000 to support their research on New Mexico birds. 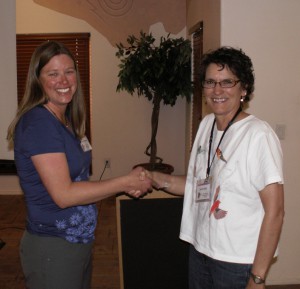 Loggerhead Shrikes are widely distributed across North America, breeding as far north as Canada and wintering throughout the southern United States and Mexico. The widespread decline of Loggerhead Shrikes across their range has prompted the listing of the species or subspecies as threatened or endangered in multiple states and provinces in the United States and Canada. There is relatively little knowledge regarding the migratory connectivity of breeding and wintering grounds, and defining this could have conservation implications. Loggerhead Shrikes are considered a partial migrant; shrikes breeding north of 40° latitude are almost exclusively migratory, and those south of this latitude may or may not be migratory. Additionally, some southerly populations may exhibit local migrations. In New Mexico, shrikes can be found throughout the state in appropriate habitats, and are present year-round. On Kirtland Air Force Base (KAFB), there is year-round presence of Loggerhead Shrikes, though numbers vary seasonally. On KAFB seasonal surveys have been conducted since 2006, and individuals have been color-banded and monitored since 2009. It is unclear if Shrikes wintering on KAFB are residents, migrants, or a mix of both. The goal of this study is to determine the origin (breeding locations) of Shrikes on KAFB and surrounding areas. Through feather collection and analysis of deuterium (stable isotope of hydrogen, denoted δD) from Loggerhead Shrikes in New Mexico, the breeding locations of these birds can be determined, and we can potentially determine the importance of New Mexico as over-winter habitat for this declining species. Funds from this grant will pay for stable isotope analysis of feather samples.

Until recently nothing was known about the migration routes or wintering grounds of the Northern Black Swift. Determining the winter distribution of Black Swifts will contribute much needed information about its life history, and in turn will influence conservation. A pilot study using geolocators was conducted at three breeding colonies in Colorado in 2009-2010 and revealed for the first time the winter distribution of a subset of this species – the Amazon Basin in northwest Brazil (Beason et al. 2012). The goal of this project is to determine the migration routes, timing of migration, and the winter distribution of Black Swifts from Jemez Falls, New Mexico, through the use of light-level geolocators. Maps generated from these data can be used to target habitat type used by the birds on the wintering grounds. Results from the pilot in Colorado indicated clustering of those birds in the wintering area, which suggests a high level of connectivity between breeding and wintering populations. Information about where other breeding populations go in the winter will help to determine whether this species is particularly vulnerable on its wintering ground from either human disturbance or climate change. Funds from this grant will pay for two geolocators, other equipment, and travel costs in New Mexico. Rocky Mountain Bird Observatory is providing a $500 match for this project, and additional funds are being sought elsewhere.