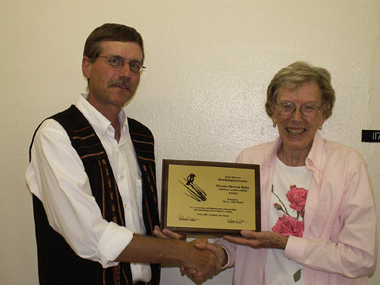 Mary Alice Root joined the New Mexico Ornithological Society (NMOS) in the mid-1970s when the organization was still very much in its infancy. She became more involved in this fledgling organization by assisting with the planning and implementation of the NMOS Annual Meetings from 1982 through 2006. She has served as President of NMOS (1989 – 1992), and as Vice-President (1992 – 1996).

Mary Alice has been instrumental with the publication activities of the society, having served as the Editor of the NMOS Bulletin from 1990 – 2003. She also typed the entire text for the New Mexico Bird Finding Guide, 1997 edition, no small feat since the publication was 352 pages long! She has remained involved in the sale and distribution of the bird finding guide. She regularly visits bookstores to encourage them to stock the book and to ensure that they receive the supply of books they need; she has also been involved in the sale of such at the NMOS Annual Meetings and distribution to other vendors.

Mary Alice has also represented NMOS at the Festival of the Cranes at Bosque del Apache National Wildlife Refuge from 1992 – 2008. She has led field trips, and has given lectures and presentations at the festival for many years.

Mary Alice will probably always be best known for her tremendous effort with the NMOS Field Notes avian database. From the beginning of the idea to make the information in the NMOS Field Notes publication available to the public in a searchable database in 1990 to the present Mary Alice has been instrumental in working with Natural Heritage New Mexico to develop the database and retrieval systems and to coordinate data entry. Since 2002, she has personally entered thousands of avian records into this valuable records database, and continues to do this as a volunteer to this date. To fully comprehend the depth and breadth of this effort, we urge you to visit http://www.nmbirds.org/sample-page/nmos-pubs/field-notes-database/ to see for yourself just how much work is involved. This searchable database is, and will continue to be, a valuable resource for New Mexican birders and researchers, as well as out of state birders and biologists interested in New Mexico’s avian communities.