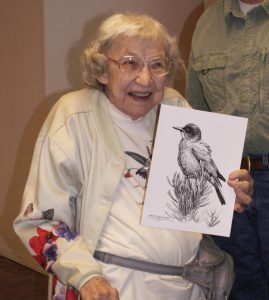 A keen birder since her childhood, Patricia R. Snider has lived in Santa Fe, Los Alamos, Albuquerque (New Mexico), and most recently in Trinidad (Colorado). In the early years, she explored much of the state, but particularly concentrated on the northern part of the state, such as Rio Arriba County, and the area around her home in Santa Fe and then Los Alamos County. Pat was a founding member of the New Mexico Ornithological Society (NMOS) in 1962. Over the years Pat has been a regular attendee and participant in NMOS activities. Shortly after the formation of NMOS, Pat began to compile and publish avian records from throughout the state in an attempt to more completely understand avian distributions and to track changes in abundance and range through time.

Since she had birded the state extensively for many years, she was a logical choice to be the Editor for the Southwest Region of Audubon Field Notes in the 1960s and early 1970s. Pat also volunteered to become the Editor of New Mexico Field Notes in 1991, and she continued in this capacity until 1999, when she passed the torch back to Sartor O. Williams III.

Pat took a keen interest in mentoring younger birders; she traveled throughout New Mexico with them and taught them what she knew about the state’s avian wealth. Pat came up with the idea of the New Mexico Rare Bird Alert (NMRBA) in 1991 and continues to maintain it, even today. She pioneered the idea of posting weekly updates on avian distribution and rarities on a county-by-county basis rather than on a regional or a state-wide basis. She has continued to keep birders in New Mexico, as well as throughout the Southwest, up to date on the avian events of the day, a task that she has continued for 18 consecutive years. In an effort to support birders and birding in the state, she also coordinated the revision of the New Mexico Bird Finding Guide in 1990.

Recognizing the need for local conservation actions, Pat helped found the Sangre de Cristo Audubon Society and the Central Audubon Society of New Mexico. She served as Secretary for the Sangre de Cristo Audubon Society for many years, participated on the Board of Directors, served as President for a year, and led numerous field trips throughout the northern portions of New Mexico. Pat helped to establish the Española Christmas Bird Count (CBC). Over the years she has also compiled the Santa Fe and Bosque del Apache CBC counts, and has participated in many other Christmas Counts throughout the state. Staying active in the field has always been a passion for Pat. She contributed to the Carrizozo and the Los Alamos Breeding Bird Surveys for several years, and also participated in the annual migration counts that are conducted in Los Alamos and Sandoval counties.

Although Pat has contributed to NMOS and the knowledge of birds in New Mexico in many ways, perhaps she is most deserving of recognition for her outstanding work on keeping birders in New Mexico and beyond up to date on avian distribution and sightings throughout the state. We sometimes take it for granted that the bi-weekly NM Rare Bird Alert will magically appear on the internet and the list-serves, but those regular updates take a great deal of time, knowledge and effort to compile and post. We thank you Pat, for your many years of contributions to New Mexico, the New Mexico Ornithological Society, and to the birding community at large.